The Youth Caucus recognizes the importance of Proposal 835 passed in 2016 to amend the GPUS Platform, which definitively laid out the party's opposition to capitalism.

It has been four years since the Youth Caucus SC put out its unanimous endorsement of the proposal, which was authored by one of its members. That statement asked Young Greens across the country to lobby their National Committee delegates. We are proud that this endorsement and call to action helped spark the momentum which ultimately helped 835 pass the National Committee with over 70% support.

You can find the original statement re-posted below. 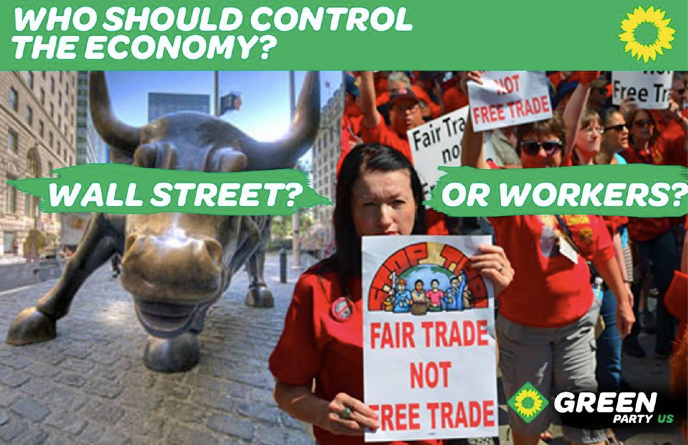 Exploitation of humans and the environment for the accumulation of wealth is literally setting the planet on fire. But it doesn’t have to be this way!

That’s why the Steering Committee of the Youth Caucus unanimously endorses the amendment changing the Green Party of the United States platform to explicitly reject capitalism and to assert our aspiration for a democratic economic system that is organized to meet human needs.  As the amendment reads, some call this decentralized system “ecological socialism,” “communalism,” or the “cooperative commonwealth.”

The new platform plank is clear yet nonspecific because the future is ours to create. Young Greens must be on the forefront of our party and in our communities for the systemic change that is necessary to create the just, peaceful, sustainable, and democratic future we want. We must be unapologetic in asserting that capitalism is a system based on exploitation and wealth accumulation that, in addition to creating tremendous wealth concentration and poverty, has brought us the climate crisis that threatens life on earth.

We aren’t going to change the system overnight but we need to advocate for policies and projects that will bring political and economic decision making where it belongs, with the people. That’s what socialism and economic democracy are about: giving all of us a say in how our lives and society are run.

We need your help in the coming weeks. The amendment will be coming to a vote before the Green Party National Committee later this month. Please contact your National Committee delegates and ask them to vote YES on the ECONOMIC DEMOCRACY platform amendment (also known as the North Carolina Amendment). If you do not know who your delegates are and how to contact your delegates, please email [email protected] for assistance.

We also welcome and appeal for your help in writing, researching, and compiling resources to help Greens, young and old, to advocate for economic democracy wherever we are.

#WeAreYoungGreens—we will continue to educate and fight for an economically just and democratic, Green future within the party, on our campuses, and in our workplaces nationwide, online, in the streets, and at the ballot box.