The Young EcoSocialists (also called the Youth Caucus) is the organized youth wing of the Green Party of the United States.

As a party that advocates for social justice issues, the Green Party offers youth an avenue to be represented and participate in electoral politics, in movement spaces, and in grassroots organizing work.

We are part of a Global Green movement that is establishing a comprehensive replacement of the typical “business as usual” party politics. Young EcoSocialists serve the needs of youth voters and are consistently forming new chapters, on university/college campuses and city-wide local organizations. Young EcoSocialists are committed to positive politics and effective political activism.

The marginalization of youth in the U.S. political process, including the electoral process, and within social movements, has long existed in the United States. Furthermore, youth are always the spark of systemic change in society, and thus always repressed by older more conservative (more socialized) people and groups, always dis-empowered by the legal system and in the wider culture due to adultism.

As part of our core identity, Young Greens underline our position and interpretation of the Green Party's Platform as anti-capitalist, intersectional/anti-oppression, anti-colonialist, and politically independent from the corporate parties and from other forms of corporate influence.

Membership is open to all Greens under the age of 35. 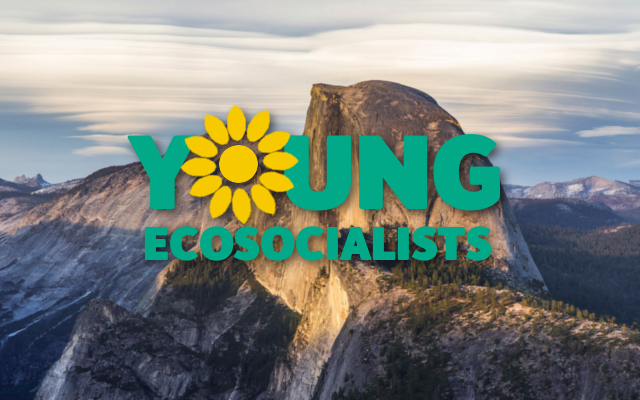 Latest Updates from the Youth Caucus

Read more
2020 Presidential Primary Results
The votes are in! Thank you to everyone who participated.

*See below for details on ballot validation and  delegate allocation.
Read more
Four Years Since 835

The Youth Caucus recognizes the importance of Proposal 835 passed in 2016 to amend the GPUS Platform, which definitively laid out the party's opposition to capitalism.

It has been four years since the Youth Caucus SC put out its unanimous endorsement of the proposal, which was authored by one of its members. That statement asked Young Greens across the country to lobby their National Committee delegates. We are proud that this endorsement and call to action helped spark the momentum which ultimately helped 835 pass the National Committee with over 70% support.

You can find the original statement re-posted below.

The Youth Caucus SC is excited to announce the creation of a caucus "Job Board."

Found on our internal organizing software, Basecamp, it lists over 30 specific positions we are looking to be filled. And already 5 have been filled within a few days! Jobs range from support with electoral campaigns to text banking outreach for our education calls, putting together a list of radical resources fo Young Ecosocialists to writing fundraising emails.

To check out the job board, hop on Basecamp.

If you aren't on Basecamp, pay your caucus dues here and we will add you!

The Youth Caucus Steering Committee voted to support efforts underway in multiple states and caucuses to add a sex work decriminalization amendment to the Green Party US platform. The next cycle of platform amendments will be considered in 2018, though submission of amendments will begin within a few months.

We encourage all Young Greens to engage your local and state parties on this topic, and when specific language arises, to sign on as co-sponsors to the amendment.

Currently, we are signing onto the amendment originally coming out of the Illinois Green Party, though will be suggesting some small edits before it is submitted to the GPUS Platform Committee.